Please sit tight and do not refresh or press back button. We are booking your tickets.

DIG out your dirndls and dust down your lederhosen - because the biggest authentic Oktoberfest in the North West is coming to Liverpool in association with Bavarian brewery Maxlrainer.

So it’s time to raise a stein to a fantastic five days of fun, focused on bier, bratwurst and the best Oompah band around.

Oktoberfest will be running from Wednesday, September 28 to Sunday, October 2, at the cricket playing fields in sefton park

There’ll be two festival sessions from 12.30pm to 5pm, and 6pm to 10.30pm, so there’ll be plenty of time to enjoy everything that’s going on, in and around the big top.

The Bavarian food village will be serving traditional German food from sauerkraut to Bratwurst, and mouth watering roasted meats, to delicious dumplings and the perfect pretzels.

There’ll be entertainment from The Amazing Bavarian Stompers - the first British comedy Bavarian oompah band booked for a major German bier festival - as well as all the fun of a fairground, and more.

Oktoberfest Liverpool have teamed up with top German brewer Maxlrainer to present the event and make sure it has that authentic Bavarian look and feel. Located about 50km outside Munich, it’s one of only 12 breweries to have been awarded the title of Germany’s Brewer of the Year twice.

“German bier is the purest beer in the world,” “It’s been brewed since the 1600s and the German governmenthave a purity rule with four ingredients, hops, malt, water and yeast! You don’t feel bloated, and you don’t feel full of additives that are in normal bier, it’s the best bier in the world

Which probably means you can sample a few, which is just as well with four varieties on offer: Helles, Zwickl Max, Schwarzbier, and Kirtabier - brewed only for Oktoberfest - on the menu.

For Friday tickets see below

Looking for somewhere to stay? The map below shows you all available deals near to the event. Ensure you book quickly to ensure availability and the best prices. Use the filters in the map to change dates and click directly on the hotel on the map to go straight to the deal.

Please note that the venue location is shown as per the venue's postcode provided to us by the event organiser. We cannot always check the accuracy of the locations so do please check before booking. 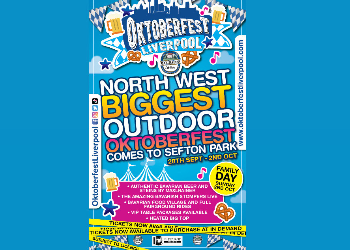 This is a private/restricted ticket. Please enter the code distributed to you to purchase tickets

© 2021 In Demand Events ALL RIGHTS RESERVED

This is a private event. Please enter the code distributed to you to access ticket pricing